A Home of One's Own

I love living alone.  I cannot imagine living any other way.  I bought my first home when I was 27 (I doubt many 27 year olds these days will be able to do that, sadly).  My first house was a small Edwardian terrace with a kitchen the size of a broom cupboard and a cosy pub at the end of the street.  It had high ceilings, original fireplaces and a large yard full of fruit trees and hydrangeas.  I loved it.

I can still remember the first magical night I spent there.  I slept on the floor of the back bedroom with the old sash window wide open.  The shadows of branches and leaves in the yard quivered on the silvered walls and the room was crisp with the scent of the autumnal night air and ripening fruit.  I  didn't sleep at all.  It was far too thrilling. I could not quite believe that this was MY house: a space that was entirely my own.  I thought about my plans for the house and the animals I would be able to bring into it.  (In my first home I owned 2 ginger tom cats: Owen and Rossiter, a dalmatian called Kipper and a scruffy mutt called Boo).  I can honestly say it was one of the happiest times of my life.

I remember going to Joblings the day after I moved in. Joplings was Sunderland's grand old department store, now closed.  I joyfully bought things for the kitchen: wooden spoons, cheese graters, tea towels, pans.  I discovered flea markets, junk shops, charity shops.  Most of my furniture was second hand - but that didn't bother me and I still own and love much of it now.  Coming home, after a day full of people and work and fuss, shutting the door of my own home gave me a feeling of utter peace and contentment. It still does.

Of course, sometimes it CAN get lonely.  But I have learnt that in every day I need lots of solitude.  I would not trade that solitude for anything.  Those languid, lurchery weekend mornings spent in a cotton nightie and threadbare cardigan, reclining on the sofa with tea, toast, the radio and a book gladden my heart.  Making decisions about what my house should look like, and only having myself to please is a delight.  What man of the male gender would agree to quite so much chintz in the bedroom?  Who would share my taste for mustard yellow velvet furnishings and funereal grey walls? What would happen if I ended up with a chap who watched Top Gear or preferred pugs to sighthounds?  Or a vegan health freak who objected to black pudding and afternoon naps?

Moreover, I think everyone simply needs some time to be themselves and be with themselves.  I remember my weekend in Harrogate with the UPVC baron and how he would amble off for an hour or so, leaving me to myself.  He shared that need for space and silence, I think.

'Aye, I'm just going to investigate where the nearest pool table is flower.'

Rather than being rejected or despondent, I rejoiced and used the time to read Bonjour Tristesse, consider which dress to wear for dinner and experiment with my lipstick collection.  How do people cope with having someone there ALL THE TIME?  Surely they just end up bickering over chores or finances.  It must be exhausting, utterly exhausting. I couldn't do it.

This is my second house and it is only 2 streets away from my first.  It was built in 1936 and, incredibly, I am only the third person to live here.  Each owner has been a single lady. I love that fact so much!  This IS Spinster Cottage!  The previous owner, Eva, lived here since 1955.  She owned a few sweet shops in town, drove an MG sports car well into her 70s and was known to be a formidable, no nonsense bluestocking.  I like to picture her as some sort of Roald Dahl creation: an ivory-handled stick (for prodding, not walking) eyes as black as liquorice pennies with a piercing, gimlet glare. I imagine her striding round her shop in a billowing cloud of Yardley English Fern talcum powder and icing sugar.  I love the dichotomy of a lady like that dispensing white mice and clotted cream fudge to quivering children.   She sounded like she was quite the character.  Older residents of the neighbourhood still speak of her in hushed tones with a respectful awe.

I moved here in 2004.  With the help of my dad, I tackled lots of the bigger, more pressing jobs (new kitchen extension, new plumbing and wiring) but then ran out of money and energy.  My father died just 8 months after I moved in, and continuing the work on my own seemed overwhelming.  I gave up.

I've recently completed lots of renovations, but this will always be an ongoing process.  I'll never be completely  'done'.  I went in the pantry yesterday and noticed half of the plaster from the ceiling had come down.  'What fresh hell is this?' I thought, before shutting the door on it all and pretending I hadn't noticed.  Like Scarlett O' Hara, I will worry about that another day.  I've had my fill of builders for the year. Hetty certainly has.  The sight of one more man in a vest is liable to send her rabid.

So, this post is to share some pictures of the house and the work that has been done. As you know, through counselling, medication and time off work,  I am trying to sort out and tidy up my life.  Sorting out and tidying up my home is the physical manifestation of that process.  It feels good to get it done.  I am beginning to feel really strong and strangely calm.  The house, I expect, plays a massive part in that.

Let's have a tour.

My bathroom was dire.  It had the original suite from the 1930s, which theoretically sounds charming - but actually was just tired and shabby. The sloping ceilings in the room meant there was no room for a shower.  So, everything in the old bathroom was ripped out and a new wet room was built into the smallest bedroom of the house (more of a cupboard, really).  The french grey tiles are from Laura Ashley.  I think they were one of the most expensive things in the refit, but they are lovely.

I really don't know how I have existed without a shower for so long.  Korres Fig Shower Gel RULES.   If you look closely in the pics you will see I have about 12 bottles of the stuff. 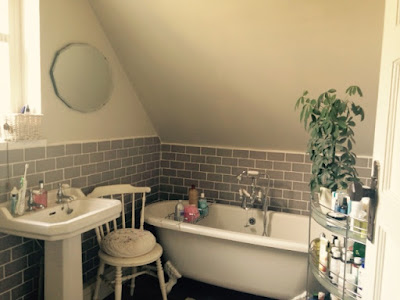 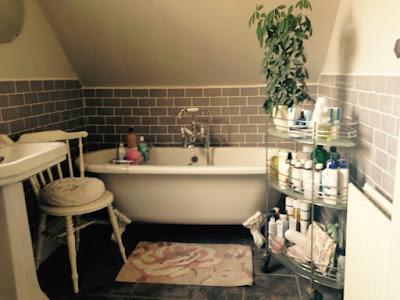 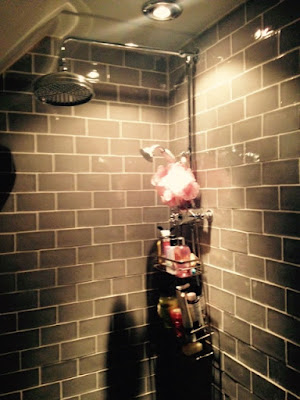 This massive window on the landing is so beautiful.  It has cracks and faults, but I will NEVER UPVC it.  Never. 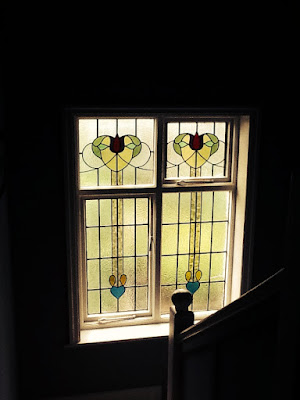 Bedroom
The house has 2 identical bedrooms which are built into the eaves and have cottagey, sloping ceilings.  The decor is Miss Marple meets Miss Pym.  Following India Knight's advice in Prime, I bought a Vi Spring mattress.  Dear God.  It has been life-changing!  I have had the walnut 1930s dressing table for years.  It was a present from my lovely dad, who had a knack of finding absolute jewels in charity shops.  It cost him £10.  I have UPVCd the bedroom windows, as they were the only ones without lovely stained glass. My new bed is crocus-hued velvet.  I've always gone for iron bedsteads before.  This one seemed very Parisian.  I imagine Linda, from The Pursuit of Love, having long, drowsy conversations with her lover Fabrice from such a bed.  (I wonder if she too was plagued with toast crumbs and PPI cold callers when she was trying to sleep). 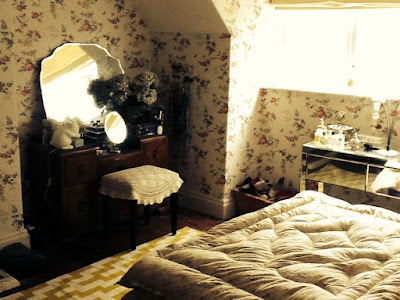 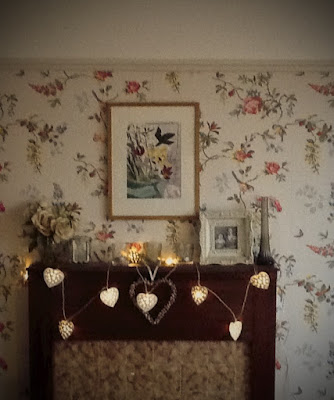 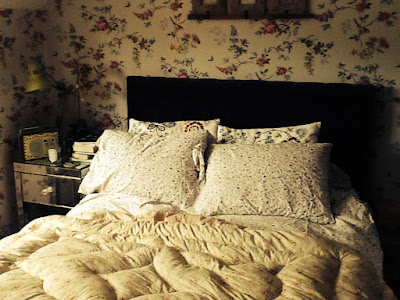 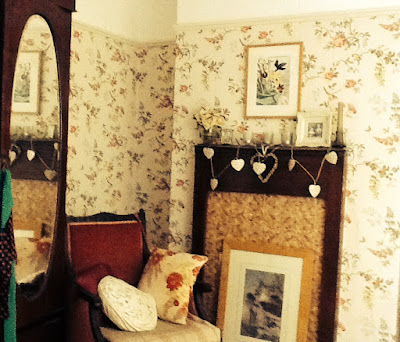 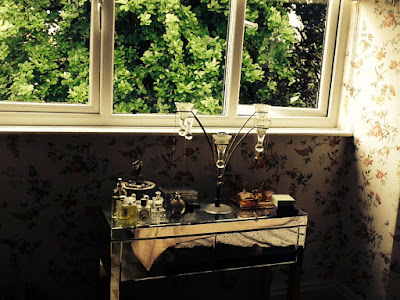 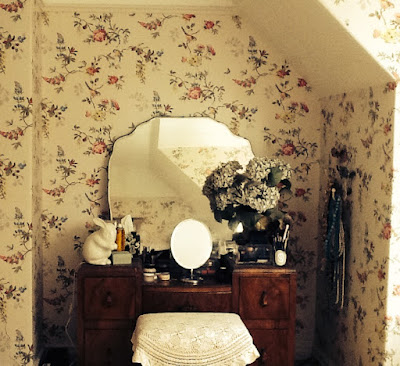 Not much was done in here, other than a coat of Oval Room Blue paint.  However, I did buy a 1960s elm Ercol table (second hand from Etsy) and faux Eames chairs (from Cult Furniture - £250 cheaper EACH than real Eames sold in John Lewis - believe me, they look just as good). 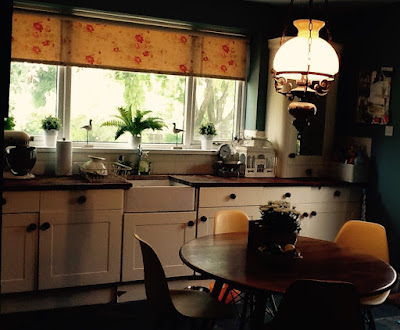 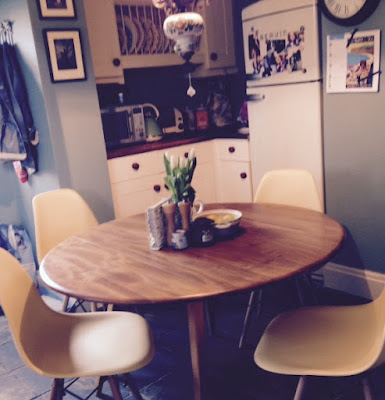 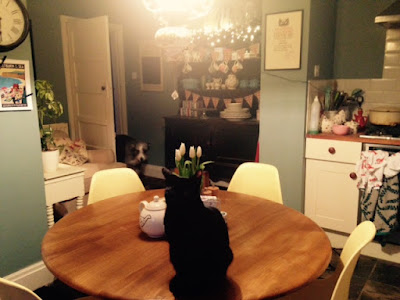 These were two separate rooms, but I found I never set a ballet-pumped foot in the dining room, so they were knocked through.  The walls are painted in Farrow and Ball Downpipe, a lovely dark grey.  I bought a frankly ridiculous mustard yellow velvet sofa and chair, which I expected would be ruined by animals within the first week.  Thankfully, they are all so affronted by its gaucheness that they avoid it like the plague.  They have their own (very old and shabby) chaise in the front bay window.  They wickedly plan their assaults on the postman from there.

New bookcases were built in - I asked for floor to ceiling, the builders fucked up the design as failed to consider the locations of sockets.  That annoyed me deeply, but I was so sick of the builders at the end of the project that I overlooked many of their fuck-ups. My Miss Jean Brodie poster is possibly my favourite thing in the room, along with the 1930s standard lamp (another of my dad's skip raiding finds). 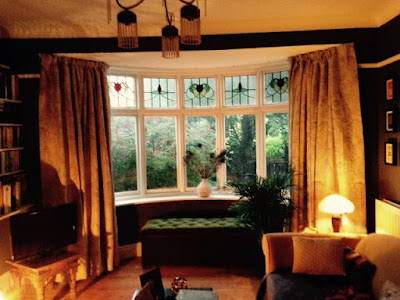 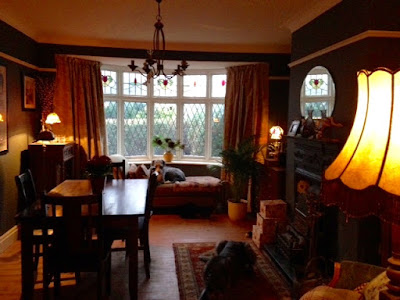 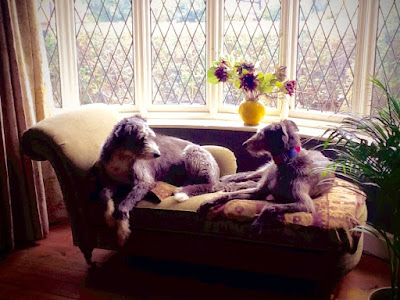 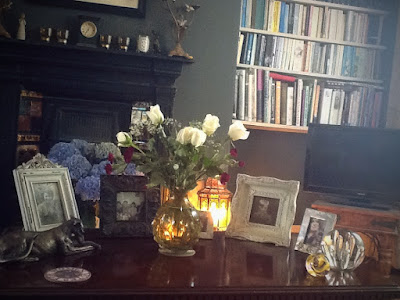 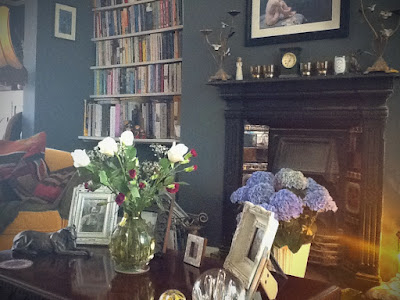 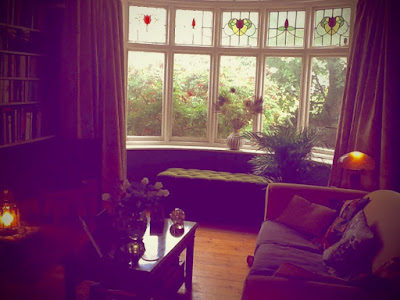 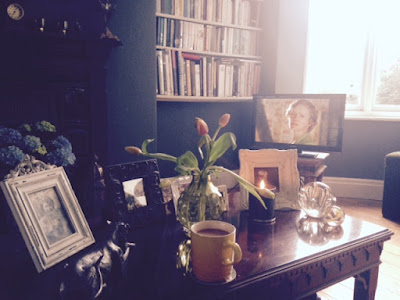 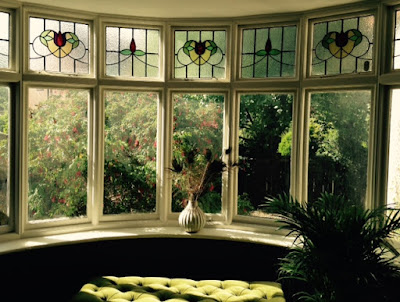 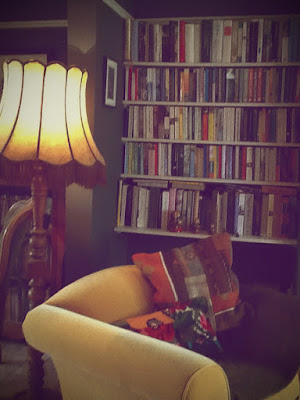 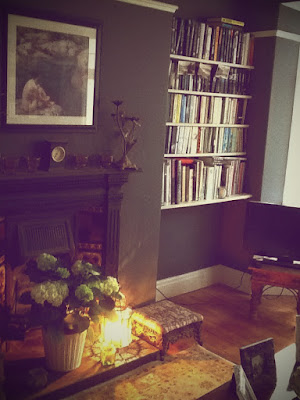 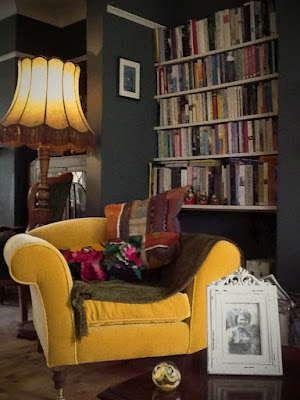 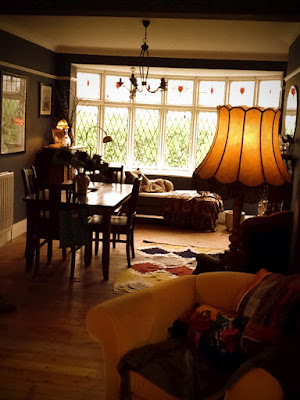 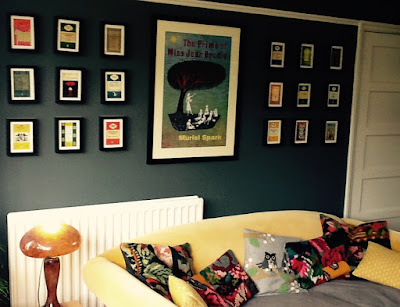 Almost identical to my bedroom: same wallpaper in a different shade. 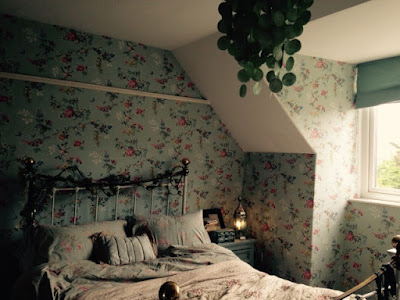 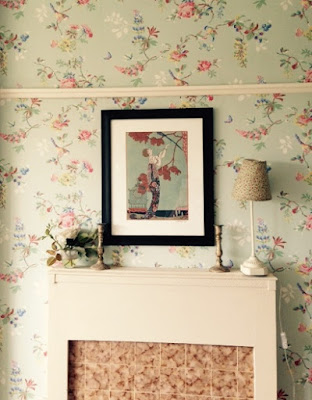 The house also has a downstairs study (originally a 'morning room', such a quaint Du Maurier-esque concept ).  I shall post pictures of that later, as I am waiting for a very special poster to be framed to complete the room.  It is the PERFECT image for a library.  I wonder if you can guess what it is.

Also, when my lady garden is finally transformed from barren nuclear-winter wasteland to blowsy cottage garden, I shall share that with you too.  Kevin, the sprightly pensioner gardener, is here again today.  Readers: I cannot think of a more depressing and sobering thought than the fact that there are now pensioners called Kevin.  Dear God.  How the years whizz by.
Posted by Miss Underscore at 11:32 am

Miss Underscore's Guide to Men of the Male Gender 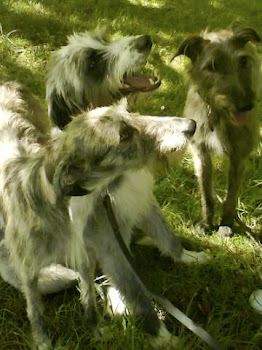 Follow the blog and make my emotionally needy day. . .